I Feel the Earth Therefore, I Am

Somewhere around puberty, I began gathering rocks. This was not an activity of a collector, nor of someone who studies the geological nuances of different areas of the country. Although I was not aware of it, this was a meditative act.

I use the word “gathering” because for me it liberated me from thoughts or concerns. Rock-gathering oriented me to my surroundings. I hunted and weighed my find, then secured it in a pocket or knotted handkerchief. This was not the simple accrual of objects. 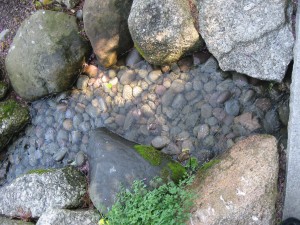 On beaches from Maine to New York, I picked up smooth round stones cool to the touch. I gathered architectural blocks of slate and chunks of granite worn to gentle ridges. In slender streams and shallow rivers, small hard lumps of rich browns or surprise reds found their way into my pockets. When I pulled them out later, it was disappointing to see their diminished color. A quick rinse or plop in the sink would temporarily restore their vivacity, like a secret revealed.

My rocks appeared in the pots of plants that dressed my windows in college. I rotated them on shelves with other mementos and dangling earrings. After college, I rode out West in a tiny yellow car with three other graduates. With my fingers as a sieve, I crouched like a gold-rush zealot in the bracing streams of Colorado.
Over the years wherever I traveled, the different hues of a landscape’s surface attracted me.

Years ago I boxed my rocks and forgot about them, until clearing revealed their hideaway. I put some in a clay pot near my bedside. They are an anchor to remind me of my steps. They are my magpie’s stash without the gleam.

In astrology, the 4 elements from ancient physics: fire, earth, air and water, are linked to each of the 12 zodiacal signs. There are 3 signs for each element. The sign that most people know in their horoscope is the one the Sun was in when they were born.

Astrologers look at a lot of other heavenly bodies in the sky other than the Sun. This enables us to paint a multi-dimensional person through symbolic interpretation. To look at the Sun-sign alone is like identifying a person simply by his/her profession.

As I became familiar with my own horoscope, I learned that neither the Sun, nor the planets, nor the moon were in an earth sign. I reconsidered my rocks. Apparently, I instinctively looked for physical weights to bring me into the earthly plane. I know that when I feel “off balance”, it is comforting to wear browns and greens. A walk through the woods or weeding the garden clears my head and increases my ability to focus.

There was a time when I thought I should unload my rocks. Since I now understand that facet of myself, I no longer see rock-gathering as a childish habit. It’s true some of my rocks have found their way into the garden. However, there is a selection still in easy reach in my home and at my desk. They are my meditation tools and I make no apologies for them.