This is the story of Chiron the Centaur, and why it is important for astrological observations. You may or may not feel a particular resonance with Chiron’s tale, or it may remind you of someone you’ve known, or of a particularly isolated time in your life.

If you feel a strong identification with the signatures of the myth, Chiron is probably prominent in your natal horoscope. As with all myths, this is a bigger than life story, but as you also know, many human stories can be quite amazing and stranger than fiction. 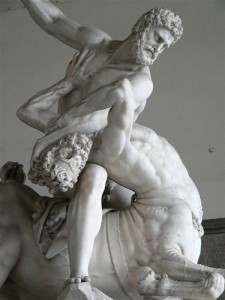 The Story of Chiron
Chiron’s beginnings were fraught with pain and chaos. The beautiful sea-nympth Philyra attracted the eye of the Titan Cronos (called Saturn by the Romans). Although he was married to Rhea, he overcame Philyra and raped her. In mid-coitus he transformed into a horse to disguise himself from his searching wife. Of course, Rhea recognized him (why else would a beautiful nymph be assaulted by a horse?) and he fled leaving Philyra with her shame.

Philyra’s life had been simple sweetness up to her violation; she was not prepared to cope. When she gave birth to a baby who was half man/half horse she found no peace in the memory of the act. Not only did she find the baby repulsive, but she considered his form to be an eternal reminder of her disgrace. She abandoned the child in a cave and begged the gods to release her from a lifetime of humiliation. Eventually, Zeus (Jupiter) took pity on her and turned her into a linden tree. This tree is very important to beekeepers because it aids in the production of honey. So Philyra fulfilled her need to be sweet, but not to the immediate benefit of her son.

Shame is usually a prevalent emotion when you are born with a strong Chiron. The native may be struggling to overcome some kind of wrong act. It can also indicate a disability that may stir up shame, however unjustified. Sometimes it is a family secret or an uncomfortable legacy, whether conscious or unconscious.

In a horoscope, Chiron is often prominent when people have felt abandoned by both parents. This scans the spectrum. The child may have experienced extreme neglect, actual abandonment or simple indifference. It may occur when parents are preoccupied with concerns other than their children. However, this does not usually mean the child grows up unguided; to find a mentor is a life-changing relationship for Chironic people.

In the myth, Chiron was not alone long. His quick mind impressed none other than the Sun god Apollo. Apollo adopted Chiron, who apprenticed in the arts of healing, medicine, poetry, prophecy and logic. Apollo was the twin brother of Artemis (Diana) and shared her dexterity, which he channeled into archery, dance and music. Chiron lapped up this knowledge like a salve for his lonely heart. People with strong Chirons often have a drive to learn and better themselves, because they are not simply satisfied with who they are.

Higher Mind/Lower Body: Centaurs were by nature ribald and unruly; Chiron was unique among them. He was after all, from royal blood. His grandfather was Uranus, the original king of the gods and ruler of the sky; his grandmother, Gaia was Mother Earth. His father was Saturn the lord of agriculture and time, his mother a daughter of the sea. His step-siblings were the gods/goddesses of the Pantheon, including the great Zeus/Jupiter.

Through his vast intellect, his connection to the earth and waters and his hunger to learn, Chiron discovered the healing qualities in nature. All other centaurs honored him as their leader, for he had wisdom and reserve that was unique to him.

Kings and gods sent their children to apprentice with Chiron. Hercules was one of his favorite students. Upon returning from a battle with the Hydra monster, Hercules and Chiron engaged in a friendly wrestle. By accident, one of Hercules’ arrows, stained with the toxic blood from the Hydra pierced Chiron.

Since he was immortal it did not kill him, but the agony of the wound offered no relief. In tandem with the psychological wound from his parental abandonment, this physical anguish is why Chiron is known as the “Wounded Healer”.

When you consider Chiron was the half-brother of Zeus/Jupiter, the king of the gods, you can see a pedigree of leadership that may be unrealized or unseen. Chironic people often feel a destiny urge, or need to lead that is suppressed due to a sense of inadequacy. Part of their journey is to overcome that and share their inherent wisdom and gift.

Chiron had to make his own way, forge his own path. He could not be at home with the gods, nor could he cantor through his life like the other Centaurs. He developed a dialog with nature which sustained him and helped others. Although he was set apart, he was deeply loved for his teachings.

In the end, Chiron offered himself as a sacrifice to free Prometheus from a heinous punishment. Prometheus is known as the fire thief, who stole a flame from Mount Olympus to give fire to humankind. Prior to that, humans had fire only when they were able to “capture” an ember and keep it alive after the caprice of lightning (Zeus’ signature).

For this affront, Prometheus was chained to a rock where Zeus sent an eagle to eat his liver every morning, only to have it grow back with the moon’s light. To free Prometheus from this ritual of pain, Chiron offered himself as a sacrifice to be destroyed in the depths of Tartarus (the traditional bartering chip for such offenses). Although this sacrifice released Chiron from his eternal wound by destroying his physical body, it also speaks of his sense of allegiance to Prometheus’ impulse. He believed in human evolution, which accelerated through the use of fire. In the end, Zeus put him in the sky as a constellation to celebrate his nobility.

The theme of a gift that accelerates evolutionary development (like fire) is often apparent in a passage of Chiron. To use the gift requires a responsibility and when misused or handled without consciousness, will result in “disaster” (against the stars).

In the great myths, Uranus and Saturn battled for power. In astrology, Uranus represents the unpredictable, flashes of genius, inspiration and rebellion. Saturn represents your physical boundaries, time and structure. Chiron embodies the combination of both and therefore is a bridge, key or doorway between the two.

The story of Prometheus is about a hero who had an impulse (Uranus) to bring fire to the earth which required tending and responsibility (Saturn). Chiron’s orbit coasts between these two planets; astronomers speculate Chiron is a renegade from the Kuiper Belt (out beyond Pluto). To an astrologer, Pluto and beyond represent the more transcendental parts of you.

Chiron bridges the energies of Saturn and Uranus through access to a deeper motivation than physical desire or intellectual impulses. Chiron reminds us our wounds stem from earthly concerns. Our transcendence comes from acknowledging this and from knowing we are all one in this wounding. Like Chiron, releasing from ego grants us the ability to fly to the sky.