On May 27, 2010 the planet Uranus enters the sign of Aries. I just finished presenting a teleseminar on Uranus in Aries, and these are a couple of my “flash” thoughts in the discussion.

First, a little mythological story. Uranus (Ouranus to the Greeks) was the first great god of the sky. He was created from Gaea, the Earth because she wanted an equal companion. He began to mate with her, and his lust for creative coupling was so insatiable he would not release her. All their children were born within her and she groaned with the weight of them.

Finally she fashioned a diamond sickle and gave it to Cronos (Saturn) one of her Titan children. He scrambled over and castrated his father, releasing his mother from her endless copulation. There’s more to the story, but this part is pertinent to Uranus’ step in Aries. In the first place, with Saturn (limits, fears, structure) still in opposition to Uranus (freedom, innovation), it is absolutely essential to foster communication in partnerships.

The horoscope of May 27 set for Washington DC suggests limits on news media and greater legal restrictions. Yet there is a hunger for a radical approach to schooling as well as individual communication. The mood of the people (represented by the moon in Sagittarius in the 12th house) would seem to indicate an underground movement. This will swell if there is censoring or monitoring enforced on the internet, which at present enables far-flung groups of like-minded people an exchange of news and ability to galvanize resources.

In the same way that Uranus was blind about Gaea’s needs since his were so great, you cannot afford to stride forward on your path at the expense of others. We are all responsible to one another which is greatly emphasized at this new cycle. The BP oil spill occurred with Uranus (signifying eruptions/no limits) in Pisces (the sign of the sea and oil). With Uranus about to enter Aries, it seems it’s time for military intervention. This problem has no end in sight, and the limited information the public is receiving as to the actual spillage does not bode well for future open communications.

In the myth, if Uranus had only listened to Gaea’s wishes, he would have retained his “manhood”. The myth teaches dynamic and decisive action may be the only course to stopping blind desire. 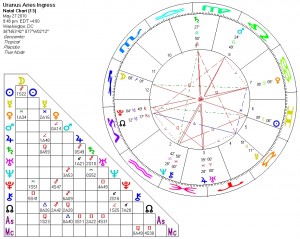