His Leonine growl: “Can’t We Still Be Friends?” 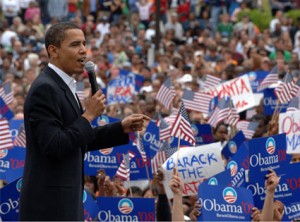 Barack Obama’s horoscope is not totally verified at this time. We have the date and place, but the time is under question. He is certainly the radiant Leo, born 8/4/61. The late astrologer, Frances McEvoy, reported 1:06 pm from his memory. To test this time, astrologers need to check it against known dates in his life to see if the passages of the planets were triggering this horoscope.

One timing observance is in 1995 Pluto went into Sagittarius, putting it in opposition to this Gemini Moon. That year his book, “The Audacity of Hope” was published and his mother died of ovarian cancer. Since Pluto has to do with transformation and letting go, it is often seen engaged with the natal horoscope during life changing events that stay with us a long time. One of the areas of life the sign of Sagittarius symbolizes is publishing. It is also related to inherent exuberance, which is reflected in his book’s title. The moon represents among other things, the mother. Although this seems a good fit, this is only one timing observance. However, I’m of the belief system that since this is the information we have for this point in time, it probably has a synchronistic veracity that should be explored (with reservation!) 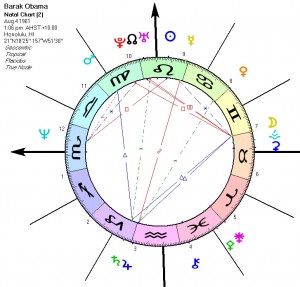 In this chart, the Moon (how we react to things) has just slipped into the sign of Gemini. Obama is known for his elocution, his ability to feed energetically from ideas. If this time is accurate, the moon shows a supportive connection to his Mercury (how we communicate). This shows a gift for connecting with listeners through his heart, which can make him likeable because people feel he understands them. The other reason this placement of the moon looks right is his youthful appearance and appeal to young voters.

A person’s moon sign will show its colors in a crisis or under stress. If he had a steady Moon in Taurus, I don’t think we’d see this range of emotions. This does not mean he is too mercurial for a role of stature, it simply means he processes quickly and does not get stuck in one emotional place. Some people can view this as flighty and unstable, but weighing it with the rest of his makeup, it shows a resistance to holding grudges and an aptitude for adapting.

JFK had the Gemini connection to the USA chart’s Uranus (change, individuality, freedom) and the US people like to feel someone capturing that part of them. A country has a chart, which represents among other things, its people. In a democracy, the people don’t vote for a candidate who doesn’t have a relationship with their country’s horoscope. If the candidate and the people aren’t relating, s/he won’t win.

Regardless of what his moon sign is, his Venus in Cancer is conjunct the US Venus, so the US people like him and he is devoted to his country. Venus in Cancer softens the imperious Leo ego; his family and his home rule his heart. He is certainly a dynamic Leo in public, having become comfortable in the limelight, in spite of his Sun’s (ego, sense of self) challenge from a Neptune square. This shows a man who can be captured by a dream (positively) or an illusion (negatively). Neptune symbolizes a person’s need to escape into the void or pursue a high ideal. He has talked and written openly about his youthful trials of defining himself.

The strong Leo Sun burns through the Neptune haze. His early experimentation with drugs succumbed to the seduction of a greater lure. His Sun (ego) needs to guard against being caught by Neptune (glamour), keeping instead conscious to the spiritual motivation of his quest for power. Being the glamorous candidate can be terrific as long as he keeps his objectivity. He may not be consciously aware how important to his spirit this race is. He does need to be careful about his close advisors, because those who don’t mean what they say may shadow him; he may take people on face value more than is prudent. Fortunately, he is married to a Capricorn (and the moon in his 7th shows his need for a wife’s counsel) and her instincts about people are keener than his. Actually, looking at Michele Robinson’s chart is essential for completing the potential of winning for Obama (as with any candidate’s spouse), but that’s for another day.

His Saturn (discipline, responsibility) works nicely with his Mars (how we assert ourselves), both in earth signs- showing a steadiness and ability to stay the course. His Mars is in Virgo, so even though the Sun/Mercury show his ability to command a room, the Mars indicates he will roll up his sleeves and work when needed (the snare here is can he effectively delegate, or does he think only he can do certain jobs very well?) This is a man who measures and dreams, who believes in change but in the end, will move cautiously.

It is part of his karmic destiny to lead (north node in Leo in the 10th house) but he must lead his way. His Uranus is in square to the asteroids Vesta and Ceres, so his tendency to go his own way can get derailed by his commitment to nurture. This is emphasized again in his Venus in nurturing Cancer in hard aspect to his expansive Jupitarian vision. This schism contributes to his strength in negotiating, because he does not want to give away his integrity but he wants very much to serve the greater good. He is not giving lip-service to education and health care. He has a strong sense of responsibility to these fundamental rights for a functioning human community.

As of January 2008, looking at transits (where the planets are now in the sky) in relation to his natal horoscope, Saturn (limits, structure) is conjunct his Pluto. This can indicate an upheaval as he revamps his life for change. As he continues to move forward in this election, Obama will have to steer with focus if he is to create stability. Any attachments he has to how he holds power may no longer serve him. Behind the scenes, this may be particularly critical in relationship with his wife (transiting Pluto in opposition to his Venus). These two will be forced to come to terms with their strong wills and desire to be with one another, pitted against the demands of a greater goal. Not just in marriage, Venus is also symbolic of any partnership and of what we value. This can also suggest a coming to terms with a running mate.

He has terrific goals and is that great combination of a charismatic leader who is also hard-working with solid values. But he may be sending out messages (he should avoid coffee with sleep-deprivation) that sound erratic to the public. He may not do as well as he would like and start to show signs of perceived instability. If I were his astrologer, I would suggest he get rest, do some yoga or martial art to direct the restructuring in a way he can control. Avoid the swirling distractions and stay the course.

But if his Moon is in Gemini, this may be difficult for him to do. And with Pluto in Capricorn now, even though the people like him they may opt for someone who seems more tempered, more predictable and experienced, especially if he gets thrown by blind spots that come at him. Barak Obama has the “bones” to be an awesome leader, but astrologically it may not be his time.

Part of the Pluto oppose Venus conversation he may be having with his wife over the next several months will be if she is willing to go the Vice President’s wife route. Or the reality of her sacrificing her own ambitions to settle into the role of First Lady. She will be his mirror as he works out if his willingness to serve his country is strong enough to endure the cost of his privacy and/or being second in line for the next eight years. Reflecting on his natural Leo arrogance, I would be surprised if that’s a role he can comfortably play.

But in the end, it’s impossible to forecast with conviction his chance of winning without an accurate birthtime and accurate horoscopes of all his opponents. Nonetheless, he has great promise and provides the US with a viable candidate to change the status quo.