6/26/2010 This Lunar Eclipse occurs at 7:30 am ET which is the exact time the Summer Solstice occurred. Since the solstice initiates the season, I don’t think it’s a coincidence that this eclipse happens at exactly the same time. In numerology, 7:30 breaks down to a “1”. The number 1 initiates. It reminds me of the tree posture in yoga. Although singular, there is a wavering as the tree is always adjusting itself into the pose. We are beginning a new cycle which the Mayans predicted millennia ago. We are approaching the end of the Age of Kali.

Of course, the numerology is different depending where you stand on the planet, but it is certainly relevant to the message for Washington DC.

When Uranus entered Aries on 5/27/2010, it sparked the energy of this Cardinal Catalyst. Since Uranus is about revolution and change and Aries is the pioneer, individuals are jumping on board with teams of activists that speak to them. The herd populace is awakening, and more and more people refuse to be complacent about what happens to them due to government and bureaucratic decisions (symbolized by the tension with Pluto in Capricorn).

This Lunar Eclipse is particularly powerful because the Moon is in Capricorn exactly in line with Pluto far out in the solar system. Because the moon represents the people, there is a waking up of the impulse to transform foundations that no longer work. Although there is fear and sadness in this, you can get through the eye of the needle if you are open to the other side of change.

General McChrystal’s resignation is an indication of this kind of shake-up. I am not going to go in depth on McChrystal’s horoscope at this time, but to focus instead on the profound implications of how he set his exodus in motion. The Lunar Eclipse is a full moon, so it’s a culmination of energy, a completion. This eclipse is unusual because it “jumpstarts” the arc of change. But since it creates a grand cross, there may be a stalemate or a sense of feeling corralled. My guess is that was McChrystal’s sensation and so he broke the chain of command. His indiscretion liberated him. Whether he can make peace with his unconscious decision is another matter.

More importantly, can you make peace with yours? What parts of your life must go to allow for your growth? What relationships are tying you back and which can you work towards greater understanding?

Since General McChrystal and President Obama are both Leos, I would imagine some mirroring went on in that meeting. McChrystal had wanted to be given more time, more respect, more attention than his commander-in-chief had been able to manage. The president ideally has learned from his lack of attention in a matter that deserved more. It has been at the cost of the general’s position.

Daniel Day Lewis/Last of the Mohicans

The Sabian symbols for this full moon are as follows. The Moon at 4 ° Capricorn 46″ – “An auto wrecked by a train”. I would imagine General McChrystal can identify with that imagery. But this needn’t cost you a job or derail your goal. However, if it does you may want to consider that it is not a failure but for another purpose.

The image goes with the Sun in Cancer: “Indians rowing a canoe and dancing a war dance”.
We are in the throes of irrevocable change, which breaks down pre-existing ways of thinking. As in early American history, people come together who usually would not, bound by the tug of change. This can open up new vistas of relationships for you, but also entail separation from people or situations that feel untenable.

So think in terms of what is your drive that feels squashed and how can you align yourself with like-minded individuals so you feel supported?

Saturn is in its last retrograde in Virgo in this cross; finish up whatever work you are doing to create a routine for a healthier you. There needs to be an integration with the spiritual. When this does not happen, a person can feel victimized or wounded. 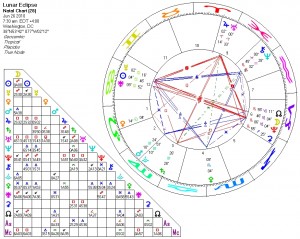 If you’re feeling somewhat trapped, find an outlet. Close the lid on anything that goes nowhere and consider walking away. Make some plans to create a new agenda, one that allows you to take initiative.

Realize that success will require appropriate partners and hold out until you find someone who is up to the task.