Coming from an art background, I have long been an admirer of Christo & Jeanne Claude (even though as an undergraduate I was under the impression that Christo was the sole agent of the work). It was years later, living in NYC that I learned Christo is the draftsman of the famous collaborators, but considers Jeanne Claude his absolute artistic partner, not a muse.

The couple was well aware of this chauvinism that excluded her and answer it directly on their website. By her death, the Art World (if not the general public) knew that Jeanne Claude was an integral force in creating the temporary installations that delighted most who saw them.

When I realized they were born on the same day, same year under the sign of Gemini, I was fascinated (6/13/1935: she in Casablanca, he in Gabrovo, Bulgaria). Since I don’t know their birth times, I have drafted noon charts for them. Their horoscopes are almost the same, although not surprisingly Christo’s Sun is closer to the midheaven (since his name is the more famous).

Carl Jung pointed out that people who were very alike needed to know themselves very well in order to be together. Otherwise they keep foisting the “shadow” part of themselves onto the partner. When Jeanne Claude and Christo met in 1958, transiting Saturn (limits, discipline) was in opposition to their Gemini Sun (ego). The time was right for them to strip away artifice and go for the structure they both needed. That they found one another is the stuff of dreams.

They shared the moon in Scorpio, which speaks of a childhood with early lessons of survival/trust/power. They created a unique system of selling their artwork, cutting out the gallery (middleman) and getting the word out through press and letter-writing campaigns (Gemini). This was brilliant and prescient- now with the internet, many artists are able to create an identity without kowtowing to the gallery system. This vision was essential to this couple, who did not want to be beholding to anyone.

As public as they were, they had an intimate, insular life, a comfort and a joy to the Scorpio moon. There is much more to reflect on about this couple through astrology, but for now I will simply express my mourning that a great, bright, carrot-headed life has left the planet. A marriage of over 50 years in the intensity of art celebrity is to be honored and celebrated. Their legacy will live as long as there are intelligent people on this earth. My deepest sympathy to her surviving spouse and son. 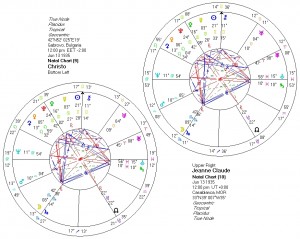