President Obama will nominate Elena Kagan for the Supreme Court at 10 am ET today according to the NY Times. Mercury is still retrograde until tomorrow and as a result, it is extremely unlikely this nomination will come to fruition.

Sonia Sotomayor was nominated during Mercury retrograde as well (yes, there is a pattern here, but that’s for another post). When I looked at Sotomayor’s chart, I was confident she would win the seat because when she was born the planet Mercury was retrograde. This is not the case with Elena Kagan.

Although I do not have the birth time of Kagan, Mercury was direct the entire day and the moon was in Gemini (a sign connected to the planet Mercury). It seems very unlikely from an astrological perspective that Kagan will become a justice, and if she were to achieve this, I do not think it would be for long in spite of her relative youth. 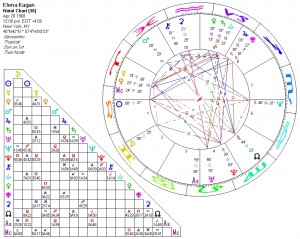 Nonetheless, the position of Pluto (transformation/power) in the sky now is hugging her natal Jupiter (wisdom/fortune), so I do see this as an incredibly expansive time for her. She’s ready to grab for it, but I don’t know that she’s aware of all the consequences.

Since Saturn (limits/fear/structure) and Uranus (revolution/change) are also in play here, once Uranus enters Aries on 5/27, revelations may come forward that change this vote. It may also be that responsibilities come up for her making the seat impossible.