Her Scorpion mantra: “I Will Survive!” 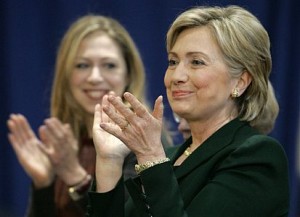 Hillary Clinton’s horoscope has been in question for years. Her mother gave out a time and she’s given out another time, actually many times. Unlike Obama’s chart which is also unverified, I prefer to work with the noon chart for Senator Clinton. A noon chart gives very good information for someone in the public eye. It won’t have the timing exactness of a verified birthtime, but it does have a truth to it.

I don’t know that Clinton has anyone around her who gives advice from an astrological perspective. But I do know she is a Scorpio who is not about to cavalierly throw out information which could give someone insight to her private life. I wouldn’t be surprised if she not only knows her time but her Piscean daughter looks at her chart. 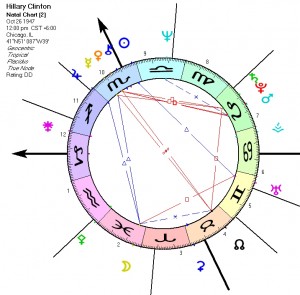 Although she was born on 10/26/47 and Scorpio is one of the most elected signs of US Presidents, this fact alone isn’t enough to win. One of her traits that create such diametrically opposed feelings in the public is her secret-keeping skills. Her cool strength and tenacity is an asset for any leader, but her willingness to overlook slights and infidelities with her eye on the big picture has caused endless derision and even hatred.

A Moon in Pisces can symbolize a person who is a dreamer, a savior or a victim (or floating through all these roles). People with strong Pisces are often successful as actors, artists, or directors because they create illusions for the public and can be what the viewer chooses to see. In the case of a candidate for the Presidency however, this is her Achilles Heel. She wants to be viewed as strong, focused and trustworthy. The Piscean quality coupled with the Scorpio reserve, makes some people think she can’t be trusted, because they can’t easily “read” her. Others see in her themselves, or their general opinion of women, which can be qualities they are passionately committed to or passionately don’t like.

The irony is Hillary Clinton is incredibly loyal and demands that from everyone close to her (Sun, Venus in Scorpio). Her husband’s indiscretions may seem to deny that, but he is proud of her (Leo) and will fight for her (even when he was the one who caused the problem). He and Obama have been snarling like the two lions they are, defending their territory. Both men care about being liked and work hard on connecting with people. Hillary certainly would be hurt by not being liked (Pisces Moon) but the Scorpio rises and decides, “Living well is indeed the best revenge”.

She knows her way around a Leo’s vanity and Obama may find himself in the uncomfortable position of wanting to win her over as well as the country. Hillary’s biggest concern is setting out what she intended to do. In 1969, she became the first student at Wellesley College to deliver their commencement address in which she said: “The challenge now is to practice politics as the art of making what appears to be impossible, possible.”

A Moon in Pisces by itself can symbolize a person who gets lost in emotional confusion, whose heart must surround a cause bigger than herself, who sacrifices and who is labeled a victim or who embodies the essence of her art. With the Scorpio planets providing perseverance, focus and strategy to her passion (which is to serve regardless of the cost), Hillary Clinton is not flesh and blood to the public. She has become an icon, although people are divided as to what she represents. She truly embodies “goddess energy”, not in its “warm and fuzzy, hug a tree form”, but in its life-force power. People resent, fear and loathe this or hold her in great respect… she is not a middle-ground kind of gal.

Think of Sedna, the Intuit myth who died a victim at her father’s hand, only to become the queen goddess who provided food for the tribe or took it away if rules weren’t obeyed. Or Ceres, the Roman goddess of the harvest, a victim because her daughter was kidnapped by the god of the underworld and made his bride. Ceres then created a famine until a compromise was worked out and the seasons occurred, blooming when her daughter came back and dying to winter when she returned to her husband. Mythology is full of powerful goddesses who assert their strength in ways different than the gods. Power is not intrinsically about testosterone.

Of course, Hillary Clinton is a human being but her sheer strength of will has morphed her into a bigger-than-life creature in the public eye. She has a dynamic conjunction of Pluto/Saturn/Mars. How does that translate?
In its positive way = Power/Discipline/Assertion
or negative manifestation = Manipulation/Fear/Aggression
or any combination which/way, positive/negative.

The US has voted for several presidents with these connections because they make for a very strong persona. This makes her difficult to ignore in a room. But because they also are in aspect with her Scorpio planets, what she says or does may make people suspect she means something else. There is an ocean of agenda under whatever is on the surface, but the agenda is not for personal gain, other than the power she knows she must obtain to administer the dream. These planets are in Leo, connecting to her husband’s Leo planets, one of the bonds they share. Now she is not stoking his furnace however, the timing is right for her to step fully into her power. Whether the American people are willing to support that, is another story.

The nodes are imaginary points in the sky that symbolize the blending of the soul’s purpose with the ego. Her south node in Scorpio (past-life snares), symbolizes the drama, the intrigue, the behind the scenes lessons that have brought her to this place. Is she is fully able to step into the karmic truth of her north node (present life’s destiny) in Taurus, ready to grip the tangible prize, to be the person who sits behind the desk in the oval office? With Neptune in hard aspect to her nodes by transit (a temporary state), this can create confusion to her and to the public. Since the US moon (its people) is also undergoing a Neptune transit, it heightens the people’s need for hope as they feel disillusioned and confused as to the best course.

People want a leader who walks with assurance. She is walking steadily on the path from all outer appearances, but what will matter most is her total conviction of her right to win. As I write this Obama is showing very well in the polls, but since his big wins occurred during retrograde Mercury, things can change.

If Hillary Clinton does not win the Democratic bid, she will most likely regroup and present herself as a Vice President candidate. It would not be the first time she seemed to get over a disappointment quickly. In the end she knows that would still be a big win for women and she is always looking at the bigger goal. Still, it doesn’t look like the candidate will be nailed down before spring. She needs to keep walking the walk, intent on the big win. A Scorpio does not retreat until she is truly done. With Pluto in Capricorn, the pull for a candidate with experience seems very strong which may well work in her favor in spite of the Obama glamour.

Look for continued postings of the candidates in the next few days!