John McCain Horoscope: A Virgo for US President?

His Virgoan Murmur: “Gotta Serve Somebody” 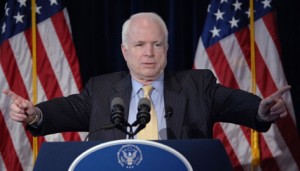 John McCain‘s horoscope is verified by medical records according to his staff. He is a hard-working Virgo born 8/29/36 and if he wins he will be the oldest man ever elected. However, Virgos are known for their youthful energy and need to keep busy. His Capricorn Moon (emotions/habits) emphasizes this. It’s not unusual for someone with a strong Capricorn signature to look older than his years when young and then look younger as he ages.

Astrology divides the signs into four elements, fire, earth, air and water. He has a great deal of earth (solid, practical, plodding) enabling him to keep his eye on the prize through whatever means necessary. Tenacity is his strength; but a stubborn refusal to see other points of view can lead to a lack of flexibility in decisions. The planet Neptune (illusion/ vision) is stongly aspected in his chart, as is Saturn (limitation/ discipline/fear). He seems to see-saw at times, almost pandering to the President but then stays hard-lined on certain issues unwilling to bend. 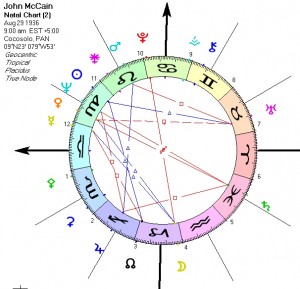 He earned his war hero status and knows it is a trump card in many discussions. He is committed to banishing torture because it’s personal as well as political. His ability to stay the course through the Bush administration in spite of his own thwarted ambitions speaks to his resilience. Because he can endure what’s really hard physically, he expects his team to do the same. And he will expect the US to if he wins: “We must win in Iraq. If we withdraw, there will be chaos; there will be genocide; and they will follow us home.” This quote is almost a threat as he articulates his own perceptions of panic and fear.

The earth emphasis can give him a coldness; there are not many indications that he has the ability to put himself in another’s shoes. This isn’t to say that everyone with this emphasis is cold, it has to be weighed with the other energies at play in his makeup and his freedom of choice in how to use them. His 1998 joke at the expense of Chelsea Clinton when she was in middle school is one of a long list of quotes that come from a person who seems to be bereft of empathy. Compassion isn’t necessarily a trait the American people may want in a President. His Capricorn Moon (symbolic of how he self-nurtures and the women close to him) is opposed Pluto (Shadow/power). This can show a person with a great deal of ability to transform himself and others emotionally. However, if that’s not what’s going on, then it may indicate a person who is manipulative and indirect about his emotional needs, to the point of the suppression of his own and denial of anyone else’s. Again, not necessarily a negative for a world leader, but certainly not a plus.

He does have Leo Mars, which can symbolize magnetism. Fire (Leo) embodies passion, enthusiasm and inspiration. Mars symbolizes how he asserts himself. Mars is supported by Jupiter (expansion) in Sagittarius, also a fire sign. We see this in his energetic run, his ability to respond and drive himself hard, reportedly stopping in 12 countries in 10 days when necessary. What would burn out most people, ignites his inner fire. The snare here is the planet Uranus (the unexpected) indicates a loose trigger on his fiery nature and his ferocious temper is “not-so-secret” in the Senate. Because of his blindness in realizing how his words are heard, he has repeatedly failed to consider people’s feelings in his outbursts, getting personal, using obscenities and burning bridges in spite of his “moderate” standing. This is why in the past predicting his ability to be diplomatic in world affairs has been questioned.

Venus/Saturn can make a person feel lack in life. Even though he’s married to an heiress, the money is in her name and McCain has a very strong need to work and serve. It gives him his self-value. Even though he was born into a military pedigree that enabled him to gain ranking in spite of graduating low in his class, he can’t take without feeling he’s paid his dues. This reflects in his flying so hard in the military and surviving the horrors of a POW. But the question now is, who does he feel he “owes”? People with this tendency usually see the “glass half-empty”, so he would be true to his “cutting the pork” promises. But “pork” to a Venus/Saturn person can cut programs that make a big difference in struggling people’s lives. He inherently believes life is hard and only the strong will triumph. He is living testimony to this.

Looking at his transits, Saturn (limits) is in Virgo, as is his Sun. This can make him low-energy (which for him may not be that noticeable). It can also suggest depression, which is curious considering his exalted state. Another thought is that with the Neptune/Saturn opposition and his health issues, he could be on a daily cocktail of medication which may need adjusting.

He has some very strong indicators he will be getting recognition in the spring. By the summer a tremendous force will take him beyond his control, indicated by Pluto on his progressed Ascendant. By early 2009, Pluto returns to Capricorn, which is triggering his North Node (the karmic point of destiny). If John McCain is able to gain the nomination and the Presidency, his term will not be in his control. A stronger will than his own will rule and with any justice, it would be the will of the American people. But in the end it will be determined by who he’s “gotta serve.”!