Patrick Swayze’s stellium in Leo shone bright with charisma, which arguably served him best in vehicles like “Dirty Dancing” and “Ghost”. His Virgo Ascendant is one indication of the application and discipline he could use to master ballet/dance (Saturn/Neptune in the first as well).

9/15/2009 is the last exact opposition of Saturn Virgo/Uranus Pisces at 24 degrees. This is exactly on Swayze’s Ascendant/Descendant.

Even though he had battled a cancer known for its high mortality rate (Saturn), his passing is a shock (Uranus). Baby boomers will flock to get screened and perhaps even consider tightening up the partying reflex. (Pancreatic cancer has a high rate of smokers + alcohol excess)

Swayze had an intense fixed Grand Cross (methodical but w/a tendency to be stuck). Yet it he avoided the romantic lead niche; he made choices in roles to avoid being typecast.

Looking at the planets involved in this Grand Cross, I think he also went for roles that helped him explore his demons. Jeffrey Wolf Green identifies Pluto conjunct the South Node as specifically correlated to an unresolved emotional or psychological trauma.

The Grand Cross consisted of the Leo planets, including a Pluto (power) square to Mars (desire) in Scorpio which opposed Jupiter (excess). The Aquarian point was his North Node.

Since ideally in this lifetime we strive to do the work of the North Node, and Aquarian’s planets are Saturn and Uranus, his passing at this time would send exactly the message his Soul intended.

Swayze’s moon (emotions, habits) was also in Leo but unaspected. This suggests, among other things, a distancing from what he needed to feel nurtured. I suspect he had a very big (and pained) heart. A Neptune transit (dissolving mass into spirit) had been opposing his Sun through this ordeal. On the one hand it had decreased his fire, but on the other, it increased his ability to access his inner light and Soul.

I have no doubt that in his last months he drew his loved ones around him and stoked and shared that inner light. The message he has left won’t simply be about awareness to pancreatic cancer, but perhaps a larger story of his life. Maybe in time one of his surviving siblings or his wife of over 30 years, Lisa Niemi, will be moved to tell it.

Such a bright Leo spectrum never goes out without leaving chill, but thank you Patrick, for leaving us a few films that will forever warm hearts. To paraphrase one of his most unforgettable films: “To Patrick Swayze, Thanks for Everything!” 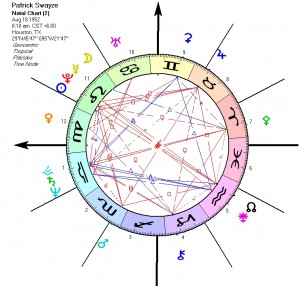 On AstroChatter Radio, my guest/co-host, astrologer Monica Starr and I will discuss the phenomena of people behaving badly under the Saturn/Uranus opposition. Also some comments on the horoscope and passing of Patrick Swayze. Listeners are welcome to call/chat questions. 646-200-4065 (phone)
http://www.blogtalkradio.com/astrochatter/2009/09/15/Astro-Chatter-Radio