The Mythology of Ceres, Persephone & Pluto

What’s Love Got to Do with It?

We astrologers love stories; our art springs from mythology. Pluto was the god of the Underworld, a place all mortals sensibly feared; it was the realm of Death. Even the other gods could not step across its borders, with the exception of Mercury, who had access to all worlds as the messenger.

Pluto’s kingdom comprised of vast lands for the dead, imprisoned Titans and monster guards. Known as cold-hearted and aloof, he spent little time anywhere other than his realm. Although considered a great god, he did not mingle well with the others; he was feared and mysterious. In spite of his power, Pluto keenly felt alone. He appealed to his brother, Jupiter the king of the gods. In his “infinite wisdom”, Jupiter chose a wife for Pluto.

Without delay, Pluto donned his helmet of invisibility. This enabled him to ride his chariot above ground without terrorizing mortals. In a valley vibrant with bright flowers he found her. A maiden had strayed from the rest of her party, her arms cradling a bouquet. The sun glowed on her hair, like a raven’s wing in flight. 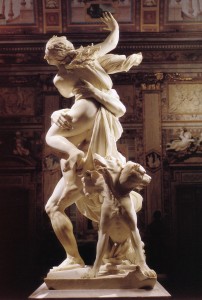 Pluto was struck with a longing beyond reason. The girl felt the ground beneath her shake as though a storm raged below. Suddenly she was swept into the god’s arms and swallowed up into his invisibility. Not one for small talk, he held her fast. She screamed and struggled, but she was no match for his implacable strength and determination.

Her companions called to her, frightened by the earth tremors and her screams. But the disturbance and her calls subsided as Pluto galloped away. It left no trace of Persephone except for trampled flowers. Some distance away, Pluto’s sword struck the earth and Persephone was swallowed up by the maw of the Underworld, her cries muted.

Unlike Pluto, Persephone had friends, was loved by the gods and doted on by her mother. Her mother was Ceres, goddess of the Harvest. When Persephone disappeared, Mother Nature Ceres was frantic. With no witnesses, Ceres searched with no clues. She methodically moved from the place of the ravaged flowers in widening spirals. At first, Jupiter gave a dispassionate eye to Ceres’ grief. But her continual searching had repercussions that he had not anticipated.

With her attention on nothing but her daughter’s loss, seeds did not sprout and crops shriveled. Mortals prayed and presented offerings to her, but she continued to roam. They prevailed to Jupiter, their all knowing and wise god. Jupiter began to see this would not end well. Without crops there would not be mortals to honor him. Up in his heavenly realm, Jupiter watched his sister’s odyssey with increasing displeasure.
Go to Part II

© Cucinell 2010 All rights reserved. No portion of this publication may be reproduced in any form without the written consent of the publisher.