Pluto in Capricorn: There's no Repetitive Way to Grow Food

I just watched the PBS documentary on “The Botany of Desire”. OK, I’ve been more than interested in food since I was a vegetarian after reading: “Diet for a Small Planet” in college.

I remember delivering a compelling speech in class senior year (I thought it was a “gut”, until I realized I had the #1 phobia: fear of public speaking). By the time I spoke about the logic of vegetarianism based on the threat of DES in meat, I had learned skills to abate the hecklers. 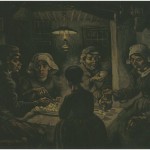 The football team and nursing students listened to me slack-jawed, but I don’t think that stopped them from eating meat. To be honest, I took it up again myself in deference to a husband. But the manufacturing of food is no joke and will continue to drive home as Pluto makes its way through Capricorn.

To consider that Irish immigration from the potato famine forged a population bedrock to the U.S., is worth noting. It is also worth noting that the blight was able to “mush” the Irish potatoe due to mono-culture. The lesson for this symbolist is to not underestimate nature, especially when the God of the Underworld is in the sign of Agriculture (Pluto in Capricorn). It might be time to bow to how nature wants to thrive instead of administering human will.

Perhaps we must look for diversity, bend to it, cultivate it, encourage it tirelessly and then if we’re really lucky, we’ve guided the growth of something that adds to the culture instead of diminishes it.