Why Sandra, Why Now?

When I first started to read headlines about Bullock being the latest casualty of the “Oscar curse”, I was skeptical. Here is a beautiful, intelligent lady who has managed to remain likable almost universally in media… how does she do that? And the fact that her “illustrated man” husband was caught cheating somehow paints her as a victim. Huh? 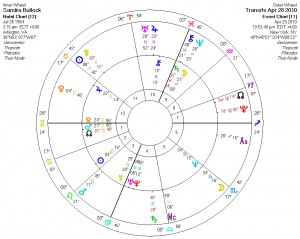 Let’s look at her chart. Bullock is a Leo: “Please like me! are you paying attention to me? let me do whatever I need to make you look at me!”

As the daughter of a successful opera singer, who spent part of the year in Germany while raising her children in suburban Virginia, Sandra grew up wanting to emulate her mother while doing her best to ingratiate herself to her everyday neighbors. In other words, she is a Leo with a strong Saturn on her midheaven (showing a desire to succeed, tow the line and yes, she was the oldest). But she also has her moon (emotional body) in Aquarius, which gives her a strong allegiance with the underdog, the alien, the rebel.

As a successful actor she is philanthropic to the underdog, is incredibly unusual in Hollywood to the degree that she was able to hide a baby from the press and identifies with the rebel, having married Jesse James for reasons that I’ll wait for her to explain in her autobiography…. although I suspect it had to do with recovering from her mother’s death and where Pluto (transformation/obsession) was traveling in relation to her perspective on relationship (7th house).

Although I do know she has Venus/Mars in Gemini on her ascendant (first house, rising sign) which blesses her with a youthful appearance and an easy relationship with the media. This gives her mimic abilities and qualities that she and Meryl Streep recognize in one another. 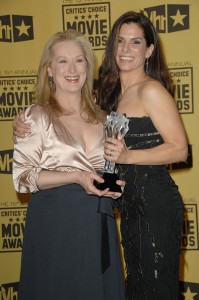 More on Streep at another time.

But what I really want to talk about is I don’t think Bullock’s divorce is an “Oscar Curse”… I think it’s an “Oscar Catalyst” that was certainly brewing before the little gold guy came into her hands. She was born with the Saturn/Uranus opposition, something we’ve been experiencing since 2008. When you are born with a pattern in the sky that happens again at another point in your life, it awakens the opportunity of that energy with which you were born. So she can make peace with her heavy need to be an authority against her need for freedom. This is her time to release from past patterns that have kept her stuck and blossom into the role model she was meant to be. Her child is her anchor.

I love the picture of this kid… talk about an “old soul!” Can’t wait to see his birth information. 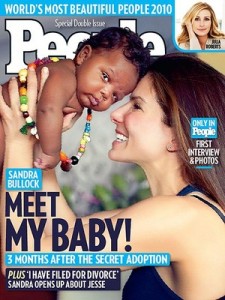 She stands tall as a 46 year old gorgeous woman who is now a single mom of a child with different genetic bloodlines. But I suspect because he has Neptune in the sign of Aquarius they will share a love of music (which she seems to anticipate by naming him after Louis Armstrong).

She releases the tatooed man as flotsam from the past that has no place in her new standing. And I suspect that the roles she will choose and be offered will be more in line with those that Meryl Streep receives because she may finally realize that she has arrived. The alien has landed and we love her.